Incentive Based Contract Farming in Malawi

Working with over 4,500 smallholder farmers in the rice value chain 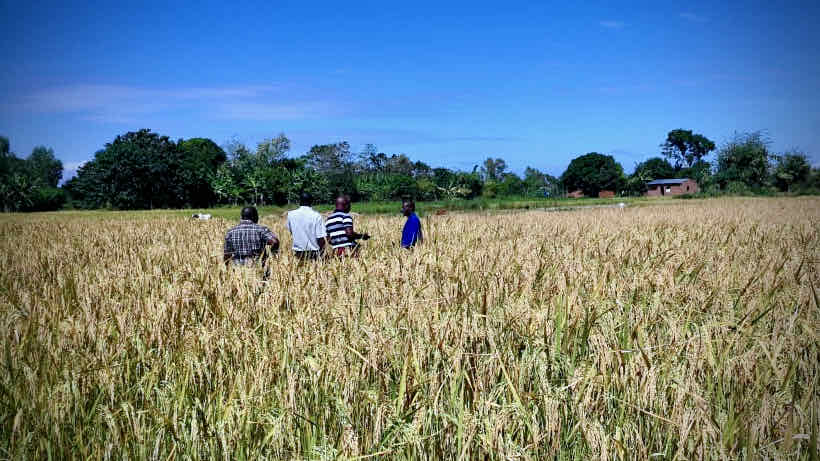 The National Smallholder Farmers Association of Malawi (NASFAM) is the biggest membership owned organisation in the country. It is organized in 14 decentralized Innovation and Productivity Centers (IPCs) which function as outreach service providers, extending support to more than 100,000 members across 60 associations. The services provided by NASFAM to its members include value addition, extension services as well as improved access to markets and inputs. NASFAM’s main commodity, rice, reaches national and regional import and export markets and is a critical element for the agribusiness entity.

Against this backdrop, NASFAM, the GIZ programme KULIMA More Income and Employment in Rural Areas of Malawi (KULIMA MIERA) and the UK-funded PROSPER Markets project set up an incentive-based contract farming scheme with over 4,500 farmers in Karonga in Malawi’s Northern Region. The scheme aims at keeping up a continuous supply of high-quality Kilombero rice to processor and markets while increasing members’ compliance and providing them with improved service packages. Through a reward system, the contract farming scheme incentivises farmers to produce the desired quality and quantities of rice. To qualify for participation in the contract farming scheme, farmers have to have an active NASFAM membership and a minimum of one acre of land. In addition, they have to use System of Rice Intensification planting methods.

As part of the scheme, contracts were drawn up between clubs, comprising ten members each, and NASFAM’s Innovation Productivity Centres, where rice is milled and sold to the organisation’s commercial arm as paddy rice. The contracts outlined smallholder farmers’ obligations as well as a number of services and benefits they were entitled to, such as access to certified seed on loan and access to recycled seeds from the local seed bank. They further specified the expected quality and quantity of rice, and a minimum price intended to exceed market prices at the time of buying. In addition, farmers received access to training on SRI planting methodologies, which aim at increasing the yield of rice.

In order to strengthen the relationship with and commitment of smallholder farmers, a micro funeral insurance was included in the scheme, insuring farmers for the growing season from January until July 2020. With death being one of the key risks for smallholder farmers on the household level, NASFAM members have seen great value and benefit in the funeral insurance, which pays out MKW 75,000 (approx. EUR 85) to the family of a deceased member to cover funeral costs. Farmers who met all contractual requirements were able to extend their insurance towards the end of the year; farmers who over fulfilled their contractual obligations or managed to pay for their seed upfront were eligible to add their spouse and children to the funeral insurance. This reward system and the inclusion/exclusion of certain benefits based on individual performance represent the foundation of incentive-based contract farming.

The overall success of NASFAM’s contract farming scheme is reflected in the growing number of communities that have expressed their interest in joining the scheme, and the positive attention it has received from local radio stations. The scheme has also boosted farmers’ motivation to produce high quality and larger quantities of Kilombero rice and to become an NSAFAM member. Furthermore, timely marketing, increased volumes and better quality have increased productivity and, as a consequence, income for smallholder farmers. Appreciating the overall benefit of the contract farming scheme, the rice associations under NASFAM are planning to revise and improve the scheme for the coming growing season. While microinsurance has proven to be a cost-effective incentive for a viable contract farming scheme, the effects COVID-19 might have regarding funeral insurance are still unclear and bear certain risks (increased expenditures, coverage etc.). This being the case, other forms of insurance, such as drought insurance, will be considered as part of future contract farming schemes.

The GIZ programme KULIMA More Income and Employment in Rural Areas of Malawi (KULIMA MIERA), in partnership with the UK-funded PROSPER Markets project and the National Smallholder Farmers Association of Malawi (NASFAM), has set up an incentive-based contract farming scheme with over 4,500 smallholder farmers in the rice value chain in Malawi’s Northern Region. The goal is to strengthen NASFAM’s overall agribusiness, increase smallholder farmers’ income and provide better access to reliable markets.