A leading farmer in his plot in Maoudine

Deforestation and land degradation are thorny issues for the planet today and Africa is no exception. According to FAO (2016) and UNEP (2013), the continent is losing about 2.8 million hectares of forest per year, with nearly 50 million hectares of land affected by degradation. As Africa’s climate changes, the sectors that use the land are greatly affected by rising temperatures and sea levels or irregular rainfall. This situation is forcing farmers more and more to adopt their crops and livestock management as a matter of urgency, given this new pressure on water and the decline in agricultural productivity (Global Forest Landscapes, 2018).

Land degradation is observed in all climatic zones of the planet. It affects about 23% of the earth’s surface and is increasing at an annual rate of 5-10 million hectares (Stavi & Lal, 2015). Land degradation due to human activities has a negative impact on the well-being of at least 3.2 billion people, and costs more than 10% of the world’s annual gross domestic product in lost biodiversity and ecosystem services. The cost of land degradation indirectly affects everyone. The overall economic loss of ecosystem services due to land degradation and desertification has been estimated at US$ 870-1,450 per person per year.

Cameroon, like other developing countries in sub-Saharan Africa, has a population of more than 80% rural (DSCE, 2010), heavily dependent on agricultural production for its livelihood.  Agriculture, livestock, fishing and the collection of forest products are the main activities of the majority rural populations. This country is vulnerable to the impacts of climate change (recurrence of droughts, floods, silting of rivers, etc.). MINEPDED, 2015a).

As an attempt to solve this thorny problem, the Government of Cameroon, in the restoration of degraded forest landscapes at the national level, has expressed its interest in participating in the African Forest Landscape Restoration Initiative (AFR 100), with the support of development partners. This approach is in line with the “Bonn challenge” launched in 2015 at COP 21, which aims to restore 150 million hectares worldwide by 2015. The AFR100 initiative, which emerged from this Bonn challenge, has made a commitment to contribute to the restoration of 100 million degraded lands in Africa by 2030.

Cameroon, by marking its adherence to this initiative, has made the second largest commitment in the African continent after Ethiopia, that of restoring 12,062,768 hectares of deforested and degraded forest landscapes at the national level, thus more than 8 million for the northern part of the country, including the Far North Region.

Very often considered as a gateway to the desert, the Far North region of Cameroon is also considered the most populated region in the country after the Central region, according to the report of the last general census in Cameroon. This region has more than 400,000 hectares of highly degraded and abandoned land due to climatic factors but also and above all, human activities and poor land management practices, hence the need to promote sustainable land management. At this rate, millions of people will be directly affected by land degradation with more severe impacts on the poorest segments of the population, in this case women and children, if nothing is done to reverse this trend. With soaring demographics, the increase in food insecurity coupled with the current social insecurity in the Far North region will increase the vulnerability of farmers to land degradation, flooding and drought.

With this in mind, as part of the implementation of the 2016-2019 phase of the ProPFE, the GIZ has set itself the guideline of promoting local know-how in soil restoration, in order to improve the well-being and livelihoods of rural populations.

The study was carried out in the localities of Laf and Maoudine, belonging to the Mayo-Kani Department of the Far North region of Cameroon. The aim was to rehabilitate abandoned agricultural plots according to soil types (Table 1).

The characteristics of the two sites are shown in Table 2 below.

The regular crops in the plots of the Leaders Farmers are mainly cereals and legumes (Table 3).

In a participatory manner, awareness and information meetings were held in the various communities. They took into account the opinions of all stakeholders. Participatory and inclusive planning of activities throughout the agricultural season was essential. A series of theoretical and practical training (based on learning by doing) took place. The follow-up of the activities was ensured by Village Animators (or Relay Trainers), skillfully chosen during the meetings, according to their ability to mobilize the populations and to communicate.

Grid of soil rehabilitation techniques in the intervention area

Table 4: Table of land rehabilitation techniques in the intervention area

With the support of GIZ-ProPFE experts and managers from the Ministry of Forests and Fauna, a total of 79 beneficiaries received technical and managerial capacity building on installation, maintenance and monitoring techniques for nursery plants. The factors that contribute to the achievement of quality seedlings were shared in the working groups. It appears that the quality of the plant depends on: (i) the ability to produce new roots quickly; (ii) the rate at which roots settle in the soil and begin to assimilate and grow after transplanting; (iii) a well-developed root system; (iv) a foliage adapted to the sun; (v) a large diameter at the root neck; (vi) a balanced ratio of rejection to root; and (vii) the availability of good carbohydrate reserves.

Approximately 500 Kg to one tonne of compost was produced by the beneficiaries for the 2018 and 2019 agricultural seasons. The advisory support and the provision of small equipment have contributed to these encouraging results. 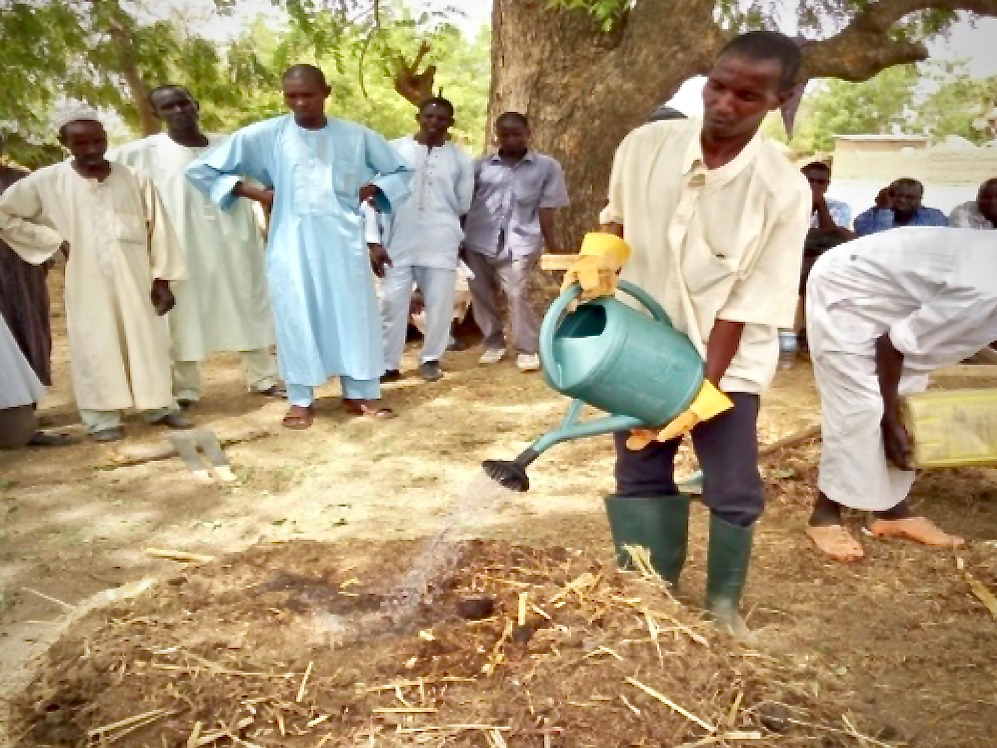 A total of 6,233 and 5,172 plants were produced in 2018 and 2018 respectively. These plants were distributed and planted among community members, taking into account the specific areas of each school plot.

Accompaniment of beneficiaries to respect the technical itineraries for planting seedlings

Emphasis was placed on the importance of respecting the technical itineraries for planting plants. Practical sessions were administered to Learning by Doing beneficiaries.

The importance and role of land cover species. Table 5 below provides a summary of the related information.

Table 5: Characteristics of the main cover crops that will be used in association with farmers’ speculations.

Technical itineraries of the association of ground cover plants with crops

In order to maximize yields, several combinations were made, either for food or cash crops. The period of introduction of ground cover plants was crucial. The plot was subdivided into blocks.  Cotton, for example, was associated only with cowpea. Table 6 below presents some associations carried out in a plot in Laf.

Table 6: Characteristics of associations in a school plot in Laf

Combination of cereals with fertilizing legumes or forage species with laf

The yields for the first year of support (2018) are shown in Table 7. They concern four (04) Leaders Farmers for an area of 6.41 ha. From these yields, the vast majority of the inhabitants demonstrated their enthusiasm for implementing the GOOD PRACTICES learned. This enthusiasm made it possible to enrol 33 other leading farmers, i.e. a total of 37 school plots undergoing rehabilitation, for an area of 22.86 ha for the second year of support, 2019. Thanks to the appropriation of GOOD PRACTICES by the Relay Trainers, a projection was estimated for the third consecutive year corresponding to a scaling up over an area of 50 ha. It is important to mention that the approach was based on consulting support with a degressive grant over three successive years.

Table 7: Summary of yields obtained on the four plots during the 2018 season

Declining soil fertility leads to low yields among small producers in rural areas. These low yields have a direct impact on food insecurity (malnutrition and famine). There is therefore an urgent need to provide viable land rehabilitation options to help communities improve their well-being and livelihoods. Although this study is still ongoing, the following implications can be suggested. These include:

The copy has been provided by Makueti Josephine Thérèse, PhD, email: jospehine.makueti@giz.de