“The tea sector is the second most important foreign exchange earner for Malawi”, said the  Minister of Civic Education, Culture and Community Development Cecelia Chazama at the progress meeting of the Malawi 2020 Initiative in Blantyre on 11 October.  Some 50,000 tea workers and 16,000 smallholder tea farmers made it the country’s biggest employer, with 1.5 million people, directly and indirectly, benefiting from it for their livelihoods.

About 120 participants of 40 national Malawian and international organizations from the tea value chain, government, civil society organizations and development partners came together to assess progress made by the initiative during the last year.

Main achievements of the initiative

Through various activities during the last three years, wages and incomes have improved to some degree, however, actual wages and incomes are still about 45% below a living wage and living incomes. Nevertheless, in 2016 the first-ever collective bargaining agreement was concluded between the Tea Association of Malawi and the Plantation and Agricultural Workers Union.

Wages of tea workers since then significantly rose above the Malawian minimum wage. The productivity of tea in tea smallholdings has increased by 6% for those farmers who have undergone farmer field school training compared to farmers that have not. Trained farmers also produce a higher quality tea by 15 to 20% and finally benefit from a tea price increase on the international level of about 8%.

Oxfam and IDH presented a new sustainable procurement mechanism that shall bring tea prices further up to reach a living wage level. The model differentiates between different tea qualities and volumes and works out a markup against an international reference price at the Mombasa tea auction. In principle, it foresees a price increase of about 12.5% over the current base price for tea of about US$ 2 in three steps: in the first year by 7 cents (3.5%), second-year by 15 cents (7.5%) and the third year by 25 cents (12.5%) to ultimately bridge the gap to a living wage.

On the second day of the conference buying companies – amongst them Unilever and Tata Global Beverages, the two top tea companies in the world – and tea producers organized under Tea Association of Malawi discussed the sustainable procurement model. In principle, both sides agreed to follow the model, however, no final agreement could be reached on the way the additional money generated could be channeled to workers.

Here, two mechanisms were discussed, first a “vertical path” where extra money goes directly from buying company to estate producer and its workers and second, a “horizontal path” where funds go into a “living wage allowance fund” which is then evenly disbursed to workers within the tea sector.

The advantage of the first mechanism is that it can better address efforts made by specific tea producers to produce good quality tea – and reward them for that —  and was therefore favored by tea buyers, while the second mechanism mitigates against wage differentials in the sector with the possible consequence of labor unrest and was therefore favored by the Tea Association.

Although parties did not get to a final agreement yet, it was noted as a great success that buyers and producers organized under the Malawi 2020 agreed, in principle, on such a procurement practice. Negotiations will continue to work out the finer details.

About the Malawi 2020 initiative

The initiative addresses low wages and low incomes in Malawi and to ultimately improve the livelihoods of tea farmers and workers. 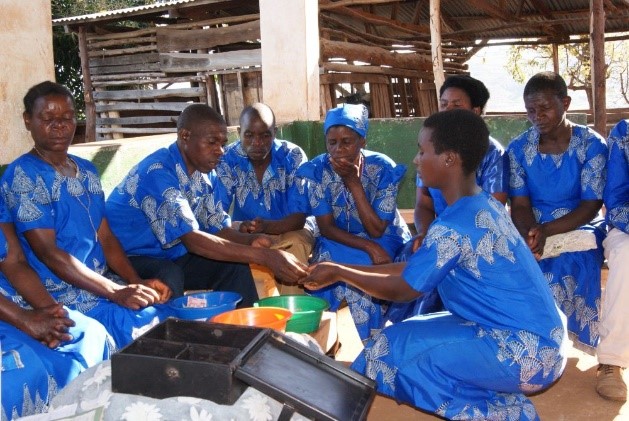 A village savings and loan group at Mulanje / Photo: GIZ

In May 2015 nearly 20 partners signed a Memorandum of Understanding. They committed to working together to achieve a competitive and profitable Malawian tea industry where workers earn a living wage and smallholders are thriving, by 2020. The initiative is coordinated by a steering committee led by the Dutch development organization IDH and the Tea Association of Malawi and GIZ, the Ethical Tea Partnership and Oxfam as members. A roadmap with five pillars had been worked out to organize the different work streams.

Under the umbrella of the Malawi 2020 Tea initiative and as part of its develoPPP.de programme, GIZ has formed the strategic alliance Towards Living Wage and Living Income. The alliance consists of six tea companies: Taylors of Harrogate Ltd., Jacobs Douwe Egberts, Tata Global Beverages Ltd., Ostfriesische Tee Gesellschaft, Tesco Stores Ltd., Marks & Spencer PLC; the Ethical Tea Partnership (ETP) and GIZ. The alliance focuses its work on pillars 2, 3, 4 and 5.