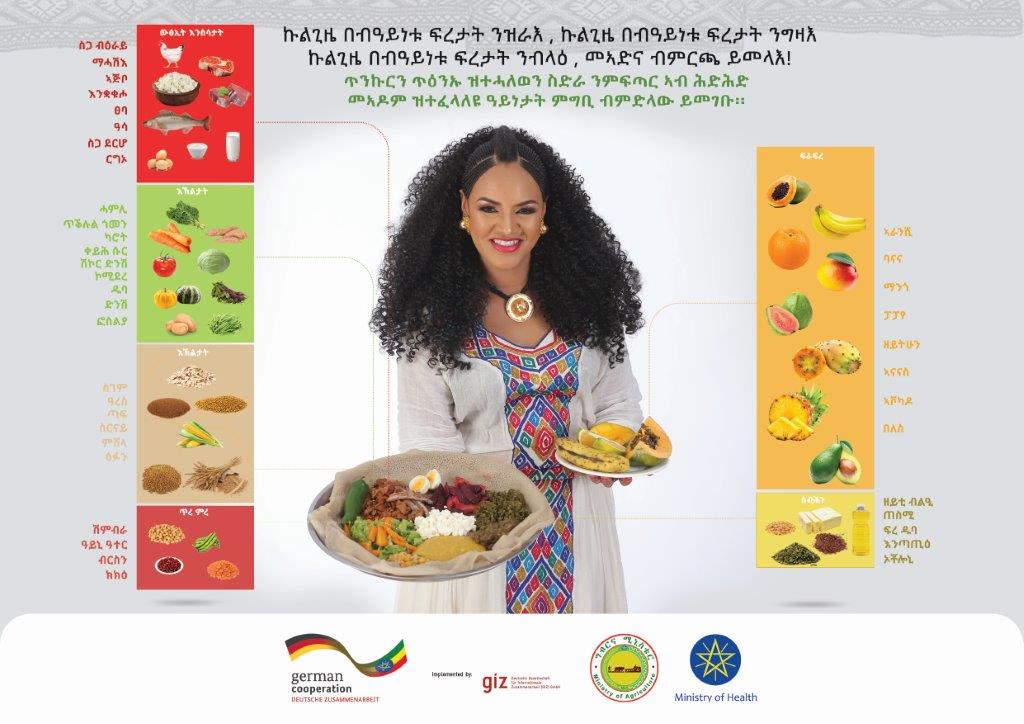 The song ‘Aynit’ – Grow variety, buy variety, eat variety, every day! carries the core message the campaign and is the heart piece of a new cooperation. In the coming months the project will travel with Mahlet Gebregiorgis into the field to raise awareness among rural communities. Updates of the project are displayed on the Facebook site of the German Embassy in Ethiopia and there are many pieces of information for example in GIZ’s Akzente magazine.

To facilitate behaviour change, the Nutrition Sensitive Agricultural Project decided to launch a campaign including celebrities who would be capable to positively influence behaviours of rural people. A survey among the targeted Ethiopian communities made evident that the artist Mahlet would be a suitable candidate to take on the role of a nutrition ambassador. Being a mother herself, the singer showed great enthusiasm to contribute to the project and immediately agreed to become the first ambassador on fighting malnutrition in Ethiopia. The project created various education materials such as billboards, recipe books and leaflets to be used for the campaign, including the nutrition-related messages for the song that Mahlet has recorded.

About the behaviour change campaign

To achieve the objectives of the Nutrition Sensitive Agricultural Project a large variety of different types of actions have been implemented. For example, incentives in the area of home gardening projects, supplying water filters for potable water and cooperations with the leaders of the Ethiopian Orthodox Tewahedo Church — all of which are pillars of the current success of the project.

Plenty of resources have been devoted to action in social and behaviour change communication. Central is the belief that for a sustainable change of food diets in households to take place, people’s knowledge about the importance of food diversification needs to change first. For example, meal ingredients such as vegetables are often neglected as they are considered less prestigious food compared to meat.

About the Nutrition Sensitive Agricultural Project

The Nutrition Sensitive Agricultural Project is an integral part of the German Government’s initiative One World – No Hunger. By following a unique multisectoral approach the project is determined to reduce malnutrition and stunting rates among the rural population in the north of Ethiopia.

Up to now, over 88,000 farmers have been reached with nutrition specific and nutrition sensitive activities. Within this group, special emphasis has been put on 12,000 pregnant and lactating women as well as on 3,000 children below the age of two. Both of these groups are particularly vulnerable to non-diversified diets and consequently suffer from symptoms of undernourishment. They require the projects special attention.