In the Far North region of Cameroon sustainable forest management remains a major concern. In 2015 a study conducted by the Ministry of the Environment estimated that 3,316,770 ha are affected by the phenomenon of degradation. Among the main factors of degradation is the uncontrolled exploitation of forest resources for subsistence needs, which is excerbated by the population explosion — nearly 4,186,844 inhabitants, i.e. 34,246 people per square kilometer in 2017.

At the economic level forest plantations play an important role in development strategies, particularly in the rural sector. The economic spin-offs from non-timber forest products (NTFP) are considerable. They inevitably contribute to generating income and creating new jobs for certain vulnerable groups.

The concept of “business biodiversity” is defined as the generation of profits by commercial enterprises through production processes that conserve biodiversity, sustainably use biological resources and equitably share the benefits derived from their use. (Bishop, 2010)

In the Far North region a model for the impetus of “business biodiversity” is being tested. Its focus is the effective and efficient exploitation of azadirachta indica, commonly known as neem, as well as other forest species. The aim here is to motivate vulnerable groups in society to form a company with the objective to reap the benefits of developing the different products of these forest species. The model was developed according to the value chain approach which aims to meet the needs of consumers while motivating the different actors directly involved in the various links to get together and forge effective partnerships.

To this end, the focus was first on production factors of plants which is based mainly on simple techniques to set up nurseries and the growing of seeds.

Implemented by GIZ’s Support Program for the Implementation of the Rural Sector Development Strategy for Forestry and Environment (ProPFE) together with the Ministries of Forestry and Wildlife (MINFOF), the production activities of forest tree species have been launched. An approach focusing on support to reforestation following a mechanism of capacity building and direct support to communities has been developed for this purpose.

A sectoral approach with women at the center

In the far-north region of Cameroon, women represent 25 to 35% of organizations. They play a big role in promoting local development and have some influence on decision-making (UN WOMAN). Despite these factors, women are a vulnerable group in this region where they do not always have access to land. The aim of the approach is to continue motivating women to commit to protecting the environment while benefiting from the substantial benefits that could result and sustainably improve their living conditions.

Through setting up nursery schools (serving as a training center), women are trained on the technical routes of production and planting trees. It should be noted that in most of the initiatives undertaken for reforestation activities, several weaknesses are identified, including the weak technical capacity of local communities and their involvement. Also, the non-adaptation of the planted species to the sociocultural context and to the needs of the communities. All this has a considerable impact on economic reforestation. To this end, the approach responds to the problems raised in strengthening the capacities of peasant associations to basic silvicultural techniques. It includes steps such as sensitization and mobilization of rural populations, post-training monitoring and mentoring of individual nurserymen and focuses on women as drivers of the initiative and targets valuable NTFPs and other agro-forestry products (PAF) valued by them. It puts at the center the Ministry of Forests and Wildlife in its key role in supporting reforestation and following an innovative mechanism for capacity building and direct support to communities. Training is facilitated by the decentralized services of MINFOF and the commune to which each women’s group or the community is attached. The aim here is to facilitate statistical monitoring as well as the ecological and socioeconomic impacts triggered by the approach.

From implementation to convincing results

The implementation of this approach has led to the training of 326 nursery managers with 89% of women on nursery planting techniques (seed acquisition, seed treatment, soil preparation, semi and plant maintenance in the nursery) and the management of the plantation (transportation of the plants, preparation of the site, planting and protection of the plants). From December 2017 to June 2018, 18414 plants (5524 fruit trees and 12889 foresters) were produced and planted in the communes of Maroua 1er, Maroua 2e, Maroua 3e, Kaélé and Yagoua. The main species are Azadirachta indica, Moringa oleifera, Balanites aegyptiaca, Cassia siamea, Adansonia digitata, Tamarindus indica

Moreover, in the distribution circuit of the seedlings produced, marketing occupies an important place (placing itself in the background of the said circuit). In fact, more than 6640 neem seedlings sold in 2018 by nurseries trained for a market value of approximately 996,000 CFA francs per year (1,600 EUR) are registered in women’s networks. The planting of these plants as well as their maintenance in the field will contribute to the preservation and restoration of ecosystems, the fight against desertification and the reversal of the process of land degradation. Actions have helped reduce poverty through income from the sale of seedlings. In the same way, thanks to the different incomes created, the women have shown to be more financially autonomous and were able to break certain taboos which had reserved the production of the plants only to the men.

Initially, from the approach, the seedlings produced were intended to be planted in agro-forests and behind and around huts. This explains the high representation of the purpose of the plants produced so far (40%). But today an opportunity to sell seedlings produced in the nursery has been added to the process. Seed producers were directly connected with various institutions or groups directly interested in reforestation activities. Production is thus related to market demand and the specific needs of different groups of women. 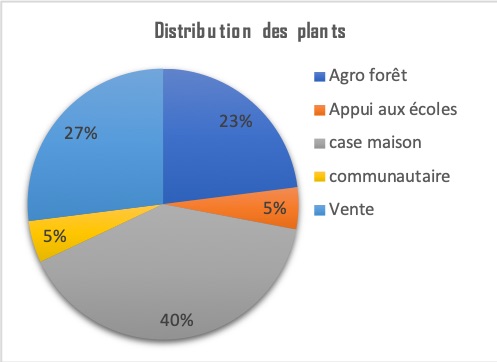 Referring to the plants during the implementation of the model, especially the neem (Azadirachta indica).

Related to the seedlings sold in the implementation of the model, a profitability analysis was conducted for the production of neem. The sale of seedlings according to Chart 1 represents 27% of the distribution of seedlings produced.

The tables show that the production of 500 seedlings of neem over a period of four months generates 61800 Fcfa (95 EUR) for the producer. The net operating income is positive, or 20,000 Fcfa generated monthly by the producer. By projecting on the long term, with more convincing demands (1000 plants for example), this will save 120.000 Frs (214 EUR) for a period of four months each year.

Most of these incomes contribute to family needs related to health, food and the purchase of clothing. For larger producers, more substantial income may be available for certain investments such as housing and transportation.

We were trained on plant production techniques in 2017. Initially, the production was intended for plantations. Thanks to my little experience in the production of plants, I have been able to sell 1200 neem plants to date to individuals. This allowed me to buy a plot of land in Makabaye (outskirts of Maroua) and provide some expenses for my family.

It should be noted that the listed buyers are mostly individuals. But there are opportunities for nurserymen wanting to invest. It is recognized that the advance of the desert forces the state to find appropriate solutions. For this reason the municipalities in the Far North region (whose reserves have been transferred) receive subsidies for the reforestation of 10,000 plants of azadirachta indica, Acacia sp and petrol each year. These subsidies represent an average of 100,000 seedlings for the Far North region worth 15,000,000 FCFA. Based on the average production of 500 plants per nursery, this could create employment for more than 200 nurseries each year.

In view of the convincing results of the village nursery and individual plantation development approach, it is necessary to provide more support to the seedling production systems and to consider the production link as a base for community development in areas with a fragile ecology.