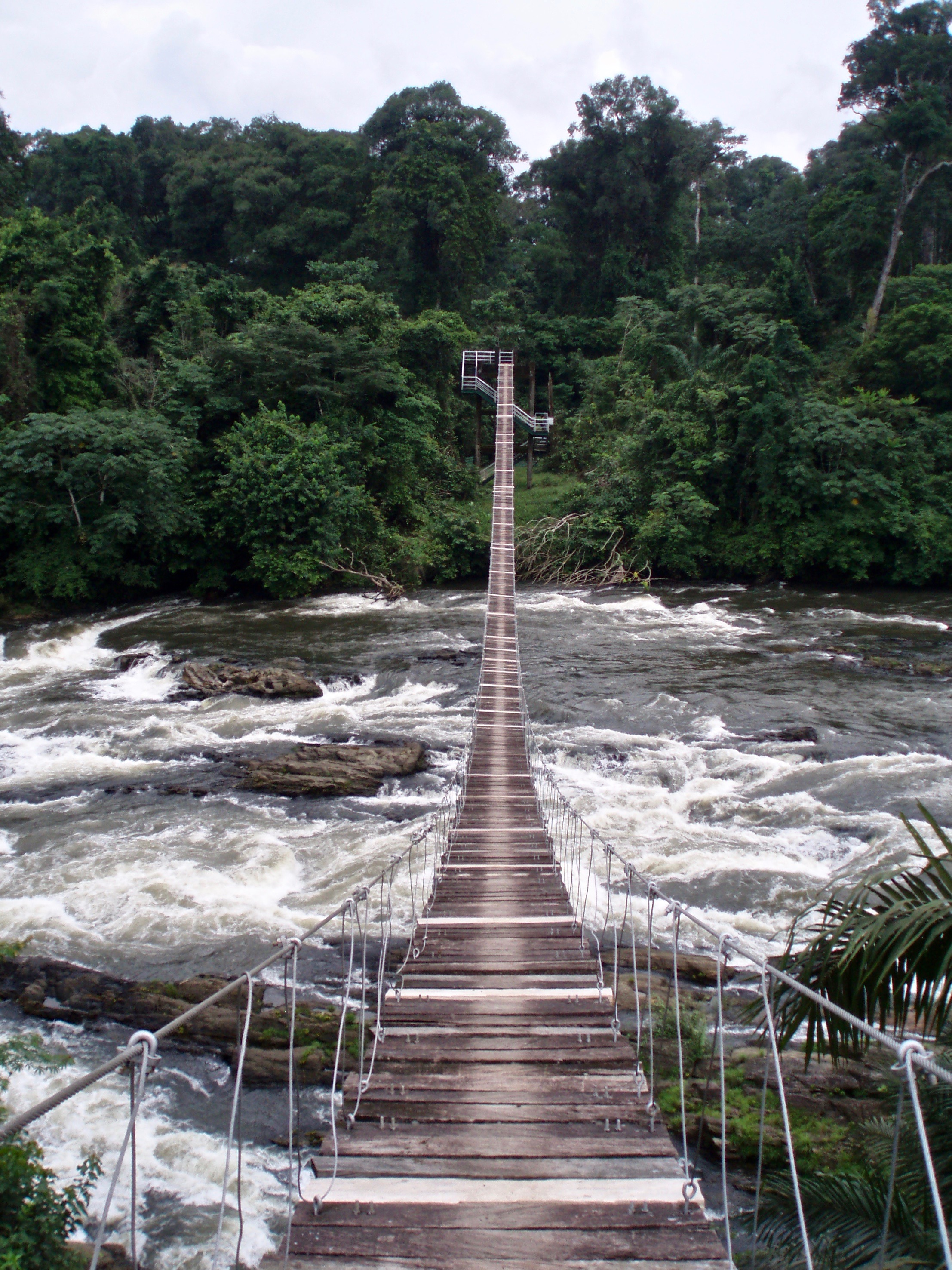 The only official entry into Korup National Park, 2007
Photo by Christos Astaras, from Wikimedia Commons

The following paper describes the process of community participation in the revision of the management plan for Korup National Park. The collaborative process used for the park is a tangible tool to motivate communities to effectively participate in protected area management.

Cameroon has a protected area network that covers a total surface area of about 461,683 ha, that is almost 20% of the national territory. The management of these protected areas has evolved from purely state-controlled in the colonial and post-colonial periods to the participatory management approach that was introduced in the early 1990s as an outcome of the 1992 Earth Summit in Rio de Janeiro in Brazil.

Following observed inadequacies in the implementation of the participatory management approach, the Ministry of Forestry and Wildlife (MINFOF) through the Programme for the Sustainable Management of Natural Resources in the South West Region (PSMNR-SWR) of Cameroon began piloting a collaborative management approach in some protected areas in the South-West Region. In this approach, local communities are encouraged to work hand–in–hand as partners with the park services to ensure an effective preservation of the resources of the parks for their mutual benefits and to promote local development and livelihood improvement in the adjacent communities through joint implementation of development projects that are consistent with the park management objectives. The effective involvement of local communities in all the stages of the co-management process is crucial for the successful implementation of the co-management approach.

The Korup National Park covers a total surface area of 126,000 ha (1260 km2) and lies between 537,033 and  604,360 N & 468,134 and 531,643 E (UTM Zone 32N). Administratively, Korup National Park is located in Ndian and Manyu Divisions of the South West Region of Cameroon. About 90% of the park is located in Ndian Division; notably in Mundemba and Toko Sub-divisions and the remaining 10% in Eyumojock Sub-division in Manyu Division. Part of the peripheral zone of the park (a 3km buffer zone around the park) is located in the Kupe-Muanenguba Division. There are 32 villages in Korup National Park of which 27 are located in the peripheral zone and five are located inside the park. Permanent Use Zone (PUZ) that gives a legal status to the in-park villages have been created for 2 of the 5 in-park villages, and the process is still to be completed for the remaining 3 in-park villages (MINFOF, 2017).

Korup National Park is the first rainforest national park to be created in Cameroon and being one of the two main Pleistocene refugia in Africa, it is an internationally recognised biodiversity hotspot and centre of endemism for many fauna and flora species. It also harbours keystone wildlife species such as the African forest elephants (Loxodonta cyclotis), Preuss’s red colobus monkeys (Procolobus preussi), buffalos (Syncerus caffer), chimpanzees (Pan troglodytes) and drills (Mandrillus sphinx). The spatial distribution of these animals is the basis for the elaborated micro-zoning plan (that guides the planning and orientation of management interventions in the park). The park is also endowed with ecotourism and research potentials and forms an ecological continuum with the Oban Division portion of the Cross-River National Park in Nigeria; with which it shares 23km of contiguous boundary on its South Western side (MINFOF 2008 & 2017).

The protected area network constitutes part of the country’s permanent forest estate, and is expected to cover at least 30% of the national territory; representing the country’s ecological diversities (vegetation biomes) on the completion of the land use zoning plan of Cameroon (GoC, 1994, MINFOF and WRI, 2005, 2007& 2012, Tieguhong and Betti 2008, Shu, 2013).

Protected areas are considered as important sites for the conservation of biodiversity and equally play an important role in the improvement of livelihood conditions of local populations through the provision of ecosystem services (Stolton et al. 2015, Shukla, 2016).

From the early 1990s especially after the 1992 Earth Summit in Rio de Janeiro in Brazil, a series of forestry policy reforms were carried out in Cameroon which culminated in the drawing up of the 1994 forestry law that emphasized the participatory approach as a tool for forests and wildlife resources management in Cameroon (Tieguhong and Betti, 2008). The participatory approach encourages the involvement of local populations and all other stakeholders in every stage in the design and implementation of wildlife management strategies.

A limitation in the implementation of the participatory management approach has however resided in the fact that mechanisms to back up local community involvement in the forest and wildlife resource management process were insufficiently developed, leading to a situation where local communities who were supposed to be partners in protected area management became mere beneficiaries of the process; with little or no contributions on the decision making process of the management of the protected areas.

Conscious of this shortcoming, the Ministry of Forestry and Wildlife (MINFOF) through the Programme for the Sustainable Management of Natural Resources in the South West Region (PSMNR-SWR), began piloting a collaborative management approach in three protected areas in the South West Region namely: Mount Cameroon, Takamanda and Korup National Parks in 2011. The Bayang Mbo Wildlife Sanctuary was subsequently included as part of the initiative to make a total of four protected areas where this initiative is being piloted. PSMNR-SWR is a conservation and development program of the Republic of Cameroon, co-financed by the Federal Republic of Germany through KFW, in cooperation with GIZ and conservation partners WWF and WCS.

Borrini-Feyerabend et al. 2000 and Borrini-Feyerabend et al. 2004  define collaborative management or co-management as “a situation in which two or more social actors negotiate, define and guarantee amongst themselves a fair sharing of the management functions, entitlements and responsibilities for a given territory, area or set of natural resources”. Collaborative management of protected areas is therefore an arrangement which permits all stakeholders who have an interest in the resources of any protected area to participate in the decision-making process and in the drawing up of strategies for the management of the protected area as well as being involved in the sharing of benefits accruing from their management.

In the context of the collaborative management approach that is being piloted in the South West Region of Cameroon since 2011, the park services and the communities that are adjacent to the parks are engaged to work together as partners for the management of the parks. What this means is that the local communities are encouraged to work hand–in–hand as partners with the park services to ensure the effective preservation of the resources of the parks. The framework also makes it possible for both parties (park service and the local communities) to jointly implement development measures that are consistent with the park management objectives and are geared towards improving living conditions and promoting local development within the communities (Dupuy, 2015 & 2017).  As such, this co-management approach is perceived as a concrete tool to enhance community participation in protected area management as well as in balancing conservation and local development.

PSMNR-SWR and her partners have developed specific tools (Fn1) and put in place local co-management structures that facilitate the effective implementation of this co-management approach. (Fn2)

Korup National Park is managed since 2003 following the prescriptions of two management and business plans (Fn3); the first from 2003–2007, and the second from 2009-2013. The latter, which expired in 2013 was recently revised and approved to guide park management activities for the period 2017- 2022.

Within the framework of the co-management approach that is being implemented in Korup National Park since the inception of the approach, the 32 villages of the park and other stakeholders were involved in the process of revising the expired management and business plans; participating actively in every stage where decisions on how the park will be managed during the 5 years period of the management plan were taken. The key phases in which the communities were involved in the management plan revision process included: the cluster consultation preparatory phase, the cluster consultation phase, the negotiation phase, and the validation phase.

The cluster consultation preparatory phase of the management plan revision process involves assembling all baseline information that will help in the strategic planning of management interventions in the park and in the park villages. Apart from gathering information from existing documents, an agro socio-ecological survey (ASEA) was conducted in all the 32 villages of the park in 2013, during which the local populations were intrinsically involved in the exercise that led to the generation of information on:

During this phase, the different forest user groups in each of the villages were also identified, the village forest management committee (VFMC), which is the legal entity representing each village in park management discussions were reorganized and each village sensitized on the management plan revision process.

The agro socio-ecological survey permitted not only the understanding of the socio-cultural and economic conditions within the communities but also provided the basis for the establishment of prioritized lists of possible co-management interventions for the promotion of local development and the amelioration of the livelihood conditions within the park villages.

Designated community representatives from each VFMC and other stakeholders took part in a three-day enlarged consultation meeting that was organized at the level of each of the six clusters that make up the KNP. Participants to this enlarged cluster consultation meetings varied depending on the situation of  each cluster but must include:

Each cluster consultation meeting was presided at by the Mayor of the concerned council area.  For the three days of consultation and negotiations, the stakeholders carried out a strategic planning exercise aimed at streaming the management interventions in the park for the five years period of the lifespan of the management plan. This strategic planning exercise comprised of:

The elements generated during the cluster consultation meetings following the list above were then validated in s sub-divisional validation meeting presided at by the Divisional Officer of the Sub Division concerned.

The raison d’être for involving councils and other stakeholders in the cluster consultation process was to ensure better coordination of interventions; notably development initiatives in the adjoining peripheral zone and to facilitate the inclusion of these development projects in the Council Development Plans (CDP). This with the vision to ensure the appropriation and sustainability of the development orientated projects that will be realized in the context of the co-management of the park.

Community involvement in the negotiation phase

In the negotiation phase, the elements that were discussed and agreed upon during the cluster consultation meetings and validated at the sub-divisional level were presented for further negotiations and subsequent validation at the divisional, regional and national levels as provided for in the 2008 National Guidelines for the Elaboration and Revision of Management Plans in Cameroon.

Designated community representatives notably the chiefs of the villages, the focal person responsible for following up management plan elaboration and revision in each VFMC participated at each of these validation levels alongside other personalities and institutions working for community interests notably: mayors, parliamentarians, senators, local NGOs and the media.

After these stages and the subsequent approval of the draft management plan by the Prime minister, the next stage of community involvement in the management plan revision process will be the implementation phase, where all the agreed strategies and interventions are implemented in the field.

Through the effective community participation in the design and implementation of co-management interventions in Korup National Park as described above, it can be observed that co-management is a concrete tool for motivating community engagement and commitment in protected area management in Cameroon. Through this collaborative management framework, park protection and community development concerns are equally addressed; thus, creating a perceptible link between conservation and local development.

GoC, 1994.  Law n° 94/01 of 20 January 1994 to lay down Forestry, Wildlife and Fishery Regulations for the Republic of Cameroon. Government of Cameroon, Yaounde.

Tchnindjang, M., Banga, C., Nankam, A. and Makak, J. (2003). Mapping of protected areas evolution in Cameroon from the beginning to 2000: Lessons to learn and perspectives.