Supporting the National Potato Council of Kenya With Subsector Coordination

Currently, the actors of the Kenyan potato subsector are collaborating to form a more competitive industry by encouraging the use of certified seed, optimization of input use, disease control, and improved storage and marketing.

GIZ’s Nutrition Sensitive potato partnership project has been supporting the National Potato Council of Kenya within the framework of sector coordination. In turn, the council helps institutions and farmers at county level aiming at the growth of the subsector in the new governance structure. Planning and coordinating activities of the subsector are important for directing and enhancing the transformation of the subsector.

About the Kenyan potato subsector

Potatoes are grown by about 800,000 smallholder farmers in Kenya. Through employment of approximately 2.7 million people along the marketing channels, the crop contributes over Kshs 50 billion to the Kenyan economy. Current productivity levels are less than 10 tons per ha, whereas the potential lies at 40 tons under recommended agronomic practices. Expanding cities are causing for an increased demand and thus the industry is viewed to have great potential to further contribute to wealth and food security of the country.

A main output of National Potato Council of Kenya is the National Potato Strategy 2016-2020. The strategy aims to provide a roadmap for addressing the identified key constraints in the industry through seven strategic objectives, namely: 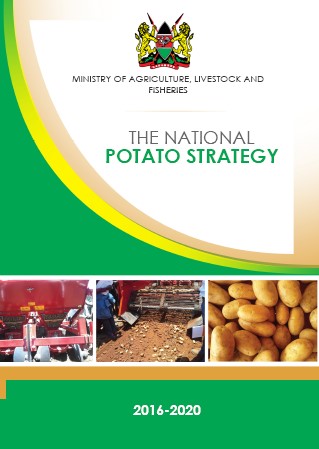 The council plays a major role in the implementation of the strategy by helping address the challenges of uncoordinated and unharmonized activities and initiatives of the industry. It acts as a point of reference where information on the subsector can be easily accessed.

At the county level 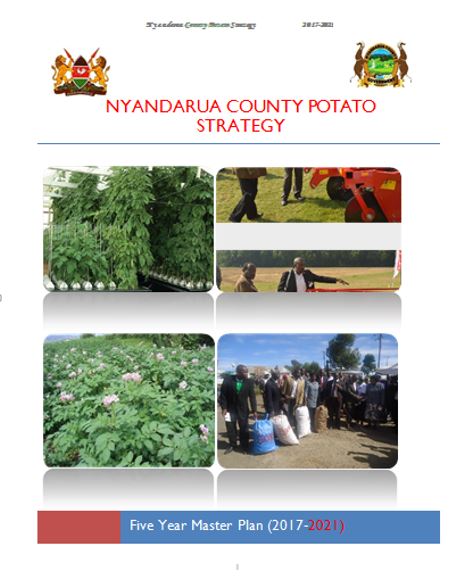 The county potato strategies help accelerate development of the subsector in the area by clearly linking the action plans at the county level with the framework of planned interventions in the national strategy. The strategy also guides on approaches of bringing together the relevant national and county level stakeholders to jointly work towards common objectives which include; strengthening Institutional, Legal and Regulatory

The strategy also guides on approaches of bringing together the relevant national and county level stakeholders to jointly work towards common objectives which include:

In addition, it prepared a Seed Potato Roadmap that will guide the processes of improving seed potato production, distribution and use, which has been a major bottleneck for the industry.

As part of knowledge management, the National Potato Council of Kenya produces a monthly e-newsletter with a subscriber base of 2,550, a new website and a bi-annual magazine. In addition, the council organises stakeholder events to enhance knowledge exchange through networking. Such events include national and county potato conferences and trade fairs. At those held in 2016 and 2017 more than 4,000 stakeholders participated.

Despite the achievements attained so far, the council faces numerous challenges, especially in terms of financial resources, and hence challenges in mobilizing the various actors for joint interventions. The individual goals and interests of the different chain actors are difficult to harmonize for joint ventures. Nevertheless, the council is determined to pursue its mission to revitalize the potato subsector and turn it into a robust and competitive subsector and potatoes a top crop in terms of food security, income earner and source of employment, especially for the youth.