A small Cameroonian municipality between forest exploitation and ecotourism

Dzeng is a small municipality in Cameroon’s Central region which is planing to invest in ecotourism. After decades of forest exploitation, the council wants to explore an additional source of revenue to finance local development projects and conservation.

Cameroon is rich. Its biodiversity, seemingly infinite forests and exotic landscapes offer enormous opportunities. The small town Dzeng with its 10,000 inhabitantsis is the epitome of the country’s abundance in natural resources. Unfortunatly, the town council’s struggle to simultaneously exploit and protect the natural wealth is also a very common issue in Cameroon.

Only 50 kms from Cameroon’s capital city Yaoundé, Dzeng is relatively accessible — for tourists and the timber industry alike. On our way there, we pass countless lorries carrying gigantic trunks – probably some of the many tree species native to this region. After one hour, we arrive in Mbanga, a village close to two of Dzeng’s council forest blocks.

“Wood exploitation is done in turns. Currently they are working in Block I”, explains Rodrigue Onana, a vigorous man who works for the council forest management unit. He stands on a muddy road next to a few trunks disposed and ready to be onloaded. The noise from the chainsaws and trucks almost drowns out his voice.

With a frown he tells us about his concerns for the forest’s future. “Much of the wood and other natural resources is harvested illegally. We struggle to manage our concession and to make the benefits available to the local communities living around the forest.”

From forest management to ecotourism

Onana and his colleagues began to explore different options. In 2017, their team attended the celebrations for the International Day for Sustainable Tourism. “The events raised nationwide awareness nationwide for mainstreaming biodiversity in key sector strategies including the tourism sector”, Iris Kirsten, a GIZ conservation expert, remembers.

Cameroon’s vast network of protected areas amounts to 20% of its national territory. Elephants, lions, gorillas and many other key species roam some of the world’s most fascinating landscapes. Dzeng has much of this unique and endemic biodiversity and the municipality wants to turn it into an asset.

Nature-based sustainable ecotourism would rely heavily on well-preserved and undisturbed ecosystems; however, Mireille Kandim is convinced that these revenues will exceed those from logging. She is one of Dzeng’s development officers and has been promoting ecotourism for a while. “Many people want to leave Yaoundé on the weekend and we have so much to offer”, she explains. Didier Bastin from GIZ’s Forest and Environment Programme (ProPFE) agrees and adds, “a growing middle class, an increasing number of expatriates and a lack of other easily accessible destinations make Dzeng an ideal spot for ecotourism”.

The Ministry of Environment (MINEPDED) has already launched a pilot project to mainstream biodiversity in the council’s local development program. Bedrock of this project: sustainable tourism. “It’s a win-win – ecotourism allows us to valorise biodiversity, stimulate the economy and finance conservation and local development projects”, Simon Patamaken, program officer at MINEPDED affirms.

“We are glad that the Ministry of Tourism (MINTOURL) will support our eco-tourism project with 130 Mio. CFA”, Monique Nkamgna, mayor of Dzeng says. She is an ambitious leader. Her office is decorated with awards for her achievement. Her dedication has earned her great popularity among her constituents. Nkamgna established the council’s forest management unit and is proud of the work Onana and his colleagues do. “They helped to increase our forest revenues by 27,5% over the last years and we invested much of that money into local infrastructure”, she says. Together with her colleagues, she now wants to take her efforts one step further and turn the investment from MINTOURL into a success.

“With this investment we will construct a reception office, open hiking trails, build a mirador and some accommodation in Mbanga“, Kandim says. 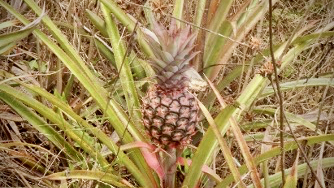 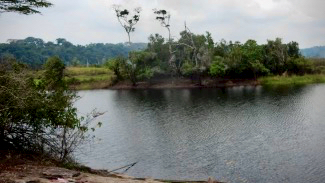 Panacea for all ills?

“We will bring Dzeng in contact with national and international parties who have experience with ecotourism”, explains Stefan Kachelriess-Matthess, outlining ProPFE’s support to the council for the coming months. However, the programme director sees some challenges ahead.

Ever since the country drifted into the so-called “anglophone crisis” in 2017, tourist revenues have plummeted. Separatists in the long-marginalised South-West and North-West region have caused havoc to the region and sparked a seemingly irresolvable independence struggle – President Paul Biya’s government and the separatists seem far from cutting the Gordian knot.

Aside from abiding concerns over the country’s political tensions, Kachelriess and his colleagues are also worried about widespread corruption and wrong economic incentives. Though Dzeng is far away from the epicenter of the crisis, many risks prevail. Nonetheless, Onana and his colleagues remain optimistic. “The tourism investment is a great start, but it will take time to move from forest exploitation to ecotourism”, he explains.

As we continue our hike through Block I, a small group of chimpanzees crosses our way in the distance. Luckily, this time they spared us a dung-bombardment – a very common defense strategy. As we continue, we arrive at banks of the Nyong river. Reams of colourful butterflies flutter around on the damp earth; Onana points at a Jaco parrot behind us. We brought wild pineapples we found in the bushes along our way and sit down for a picnic. Surely, Dzeng deserves to be seen.

The copy has been provided by Iris Kirsten and Sven Schuppener.