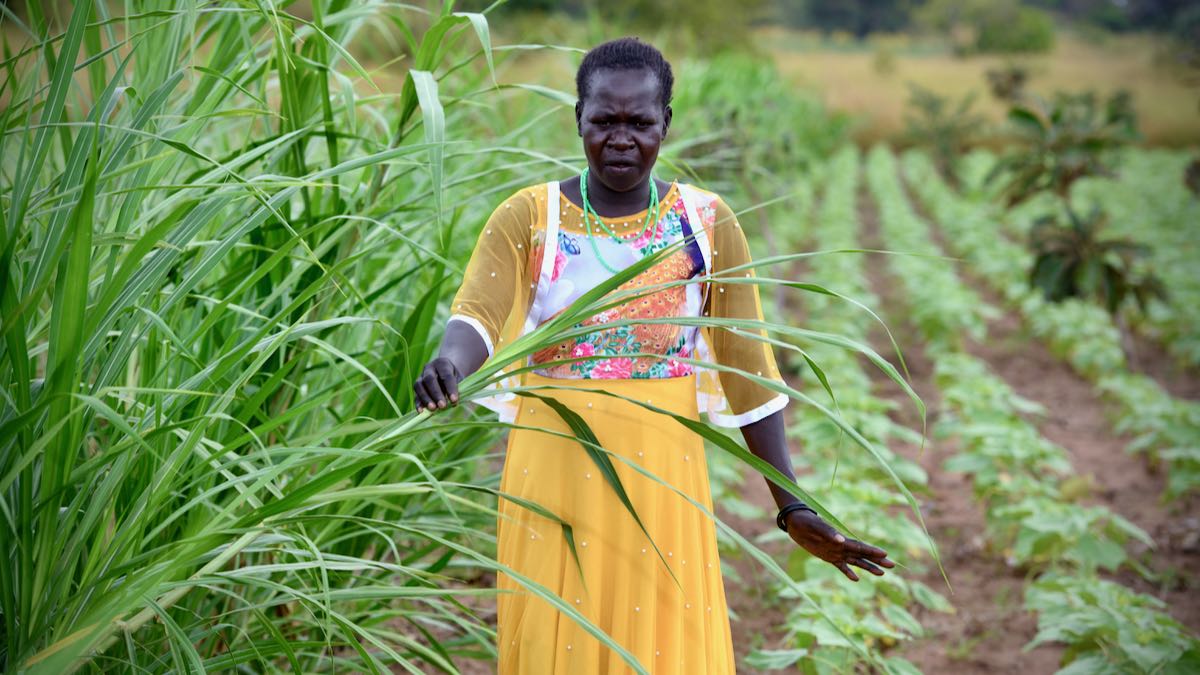 Paska Ayigi, a beneficiary of the Lacan Kwo Lwete farmer group in Agago district explaining the importance of grass bands in controlling runoff on the farm. The grass is also used as animal feed.
Photo:  © GIZ/PRUDEV

In northern Uganda, farmers depend mainly on rain-fed agriculture for their livelihoods.

Since rainfall has become unpredictable, agricultural production is more and more challenging for them.

Prolonged dry spells and floods are other extreme weather events that farmers here are faced with.

“It all starts with the mind. I was ignorant. But now I know the use of crop residues,” says Sylvia Oyet, 49, who participated in the climate-smart agriculture training. She’s from Aungu village in Oyam district.

Oyet and other farmers were trained in soil and water conservation practices such as mulching, compost manure making, water retention ditches, soil and grass bands, agroforestry, and on-farm diversification including beekeeping. 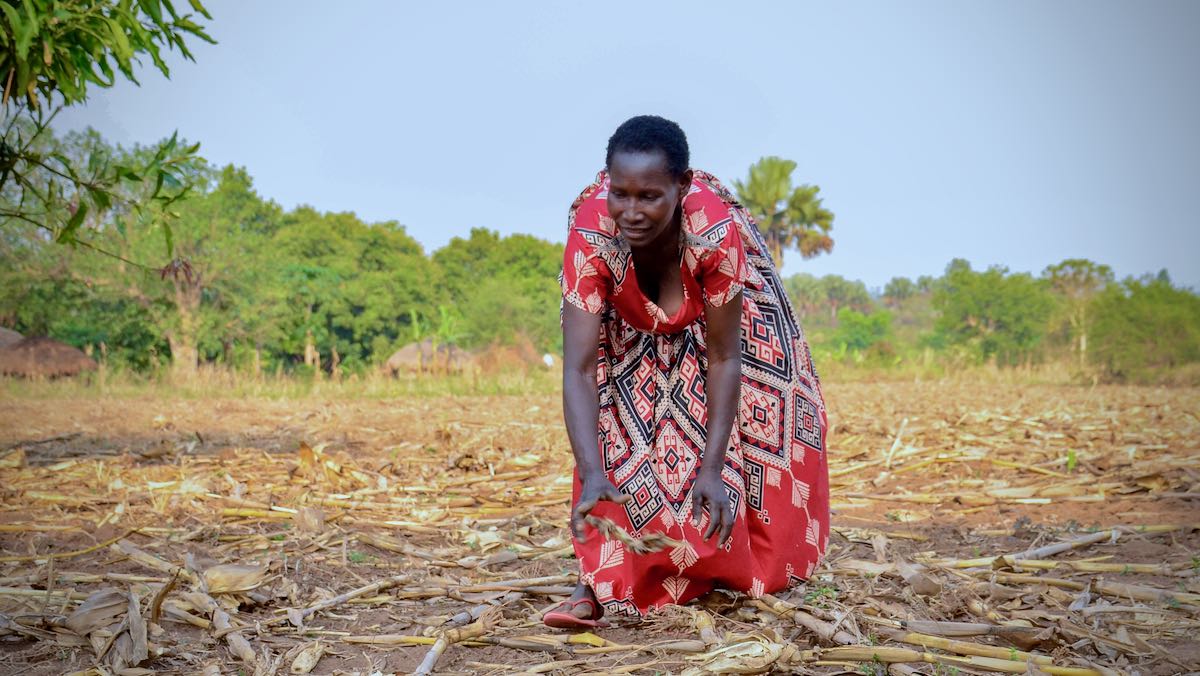 Ayet spreads the maize plant residues to allow for them to decompose in her garden after harvesting.   ⎮ Photo: © GIZ/PRUDEV

Oyet used to collect the residues from her maize crops, take them to the edges of her garden, and set them on fire.

Not anymore after she received training on the impact of climate change impacts on agriculture as well as on how farming affects the climate.

‘‘I just leave it and will plow the garden with the maize residue; the residue will get rotten and make the soil more productive,’’ she says.

‘Crop residue adds nutrients in the soil making it more fertile and it saves me a lot of time. It appears simple but still, I didn’t know about it. Thanks to our community-based trainer for taking us through the activity at our group demonstration garden” she says. 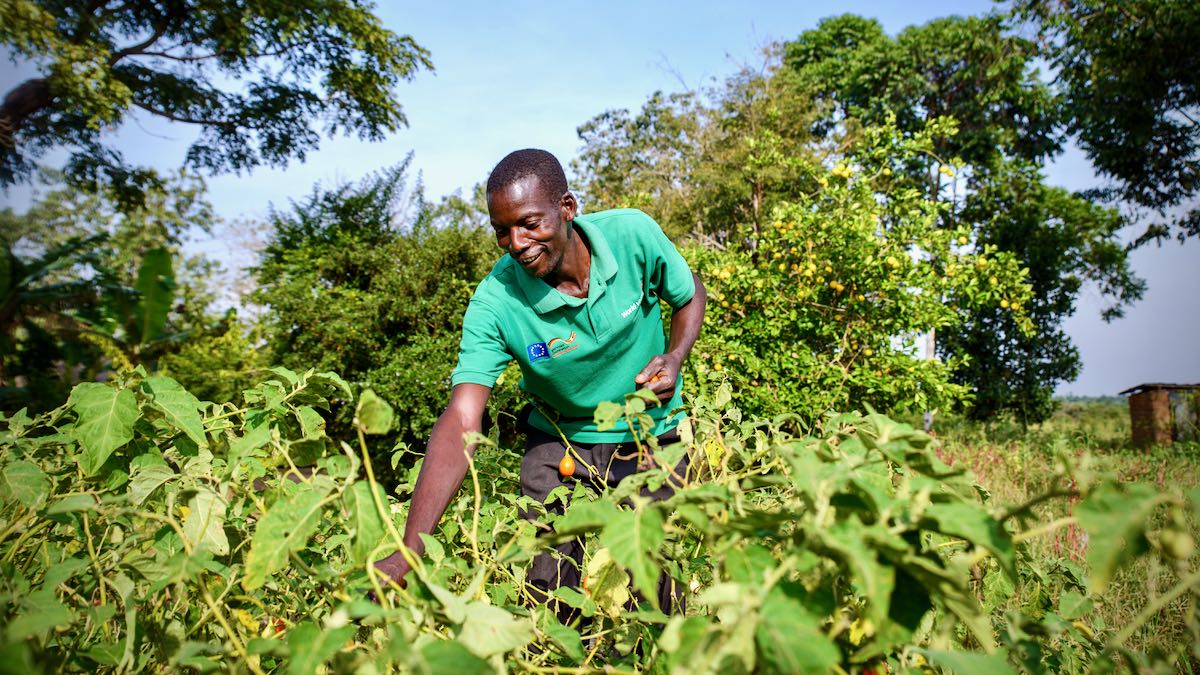 Henry Oburm, a youth farmer, from the neighbouring district Lira shares his experience.

“Personally, I have started planting some fruit trees in my fields and set up backyard gardening. The trees help against soil erosion and I have additional fruits. My backyard garden provides food at all times. It’s close to my home, so I can easily recycle some of the used water and kitchen scraps. Because of the training, I managed to grow, sell and save some money from the vegetables” Oburm says.

Oburm has already made plans to increase the volume of his production and plant more trees.

The training on climate-smart agriculture so far

Sylvia and Henry are part of the about 11,000 farmers who have already benefitted from the training.

First, the project worked with different farmer cooperatives, district local governments and research to assess and then to compile climate-smart agriculture practices suitable to the local context in Northern Uganda. As part of the training, each farmer group chooses practices that fit their situation. Farmer groups discuss and analyze Climate Change risks and hazards and come up with Action Plans, which are jointly implemented.

In addition, the farmers keep records of their practices, which are then used to assess the amount of greenhouse gas emitted. Together with the district local governments, the findings are shared on the National level as a contribution to the nationally determined contribution (NDC) of Uganda.