Cashew is becoming a vital commodity and an ecological factor in the country, increasingly generating political interest

Lately basically all actors in Burkina Faso are discussing how to regulate and promote the cashew sector sustainably: Is following the Ivorian example an option, or learning from cotton — historically and politically the dominant cash crop? Or should the country capitalize on its well-organized private sector to find a new way?

To answer these questions, public and private actors seek to organize themselves and engage in a profound dialogue within the sector and with development partners.

Agriculture continues to play an important role in Africa

Two-thirds of the people in Africa are employed in agriculture, making it the continent’s largest source of employment. Today most African countries are faced with the challenge of having to get their agricultural sector ready for the immediate future as well as sustainable in the long run. Vital is also the aspect that agribusiness offers perspectives to rural populations — above all to young people, who currently make up more than 60% of African populations.

The production and processing of cashew nuts is one proven way to create such positive perspectives in Africa. Nowadays, one cashew nut out of two consumed globally originates from Africa, making the continent the world’s largest producer. Mainly produced by some 1.5 million small-scale farmers and given its manifold potential, the crop considered something like a panacea in many countries.

Since incessant climate change is forcing many farmers, especially in the Sahel region, to break new ground, the cashew tree is an ideal plant when it comes to adapting cultivation to the new situation. Extending periods of heat and drought in these areas make traditional crops difficult to cultivate. Cashew trees provide small farmers with an innovative alternative with future viability. The crop also has great potential to develop processing locally, creating considerable employment in rural areas. Moreover, cashew as an export product connects to the international market, opening other sources of revenue. 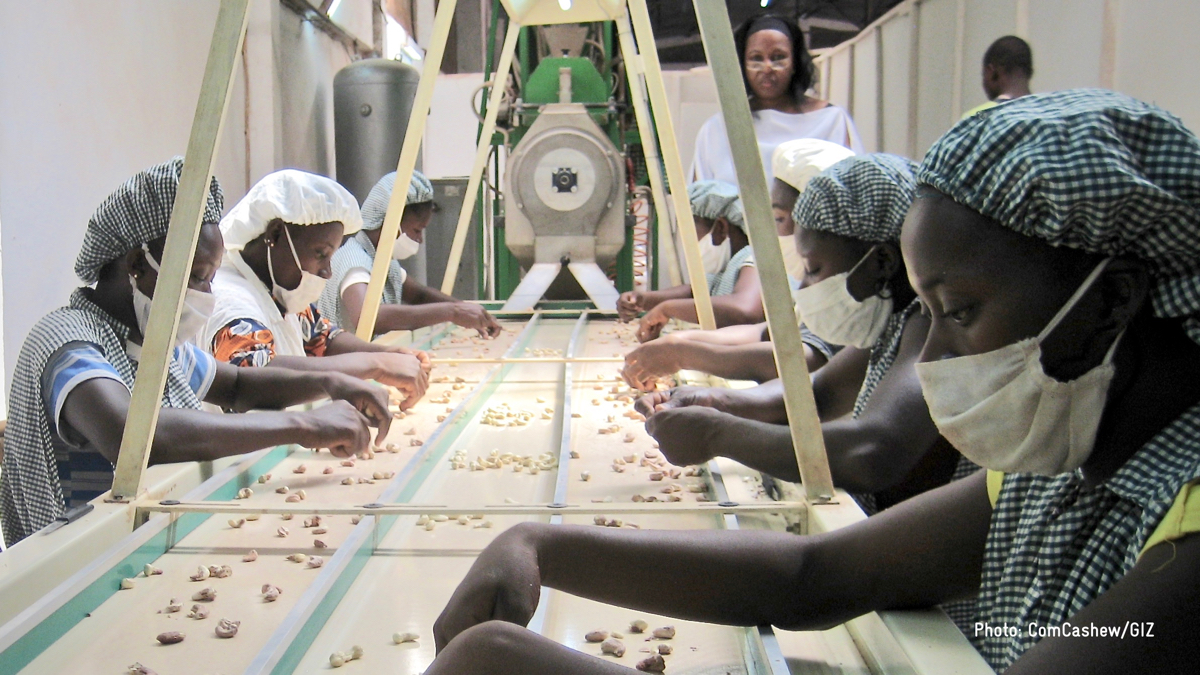 Cashew is responsible for new jobs in the rural Sahel

Burkina Faso is no exception to this trend. One-third of the GDP is generated by agriculture-related activities [1]. Agricultural value chains — among which cashew is significant — are considered to be the drivers of the current economic growth. Cashew is more than just a nut. In the Sahel region, which is very vulnerable in terms of economic performance, the overall security situation and pending adaptation of agricultural activities to climate change, the crop offers considerable potential for employment and income generation.

In 2016 Burkina Faso’s Balance of Trade showed cashew nuts were the third largest export product, after cotton and sesame, with a value of 67 billion CFA francs corresponding to 4.5% of the total value of exports [2].

Cashew nut production in Burkina Faso is expanding rapidly. The Ministry of Agriculture estimated that about 85,000 tonnes were produced by approx. 65,000 farmers in 2017 [3] — primarily in the four regions Cascades, Centre-Ouest, Hauts-Bassins and Sud-Ouest.

Further processing is also increasingly important in Burkina Faso. The existing 14 processing units are located in the cultivation areas and have an installed capacity of 18,000 MT.  Women are the most important actors in cashew processing segment. In 2018, they represented 90% of the individuals in the National Processors Association (ANTA-BF).

Nevertheless, only slightly more than a third of the capacity in place is utilized presently and only 10% of the national production is processed in the country. The potential for more value addition and economic growth is therefore high.

Stepping in the elephant’s footprints — follow the Ivorian model?

Cashew is becoming economically and ecologically more and more important for the country and this importance has translated into a greater political interest. “How to govern the cashew sector and promote it sustainably?” has become the question being discussed at all levels in Burkina Faso.

Following the example of neighboring Côte d’Ivoire, the government of Burkina Faso is paying more attention to the cashew sector. In Côte d’Ivoire, cashew production has doubled in ten years, from approx. 350,000 MT in 2009 to more than 730,000 MT [4] in 2019. This makes the country the biggest cashew producer in Africa. One of four cashew nuts grown globally grows in Côte d’Ivoire. Compared to Burkina Faso, who produces approximately 10 times less cashew than Côte d’Ivoire, the Ivorian sector may seem disproportionally huge. Nevertheless, grown in neighboring regions, the cashew producing areas in both countries present ecological, social and economic similarities.

In both countries, cashew and cotton are the main drivers of economic and social development, particularly in poor and rural areas. Compared to cotton, cashew is still a very young crop in Burkina Faso. Historically cotton has been the most economically important cash crop for the landlocked country. It has been and remains a vital source of income and is the largest source of export earnings. Introduced in colonial times under a strong political will, the production and processing of cotton remain highly important to the economy of the country. It serves as a source of livelihood for more than 3 million Burkinabés [5].

Despite the highly centralized and publicly organized cotton sector, the latter lacks long-term and growth promoting strategies. Poverty remains concentrated in the cotton growing areas [6]. Cashew, grown in the same cotton-producing regions is, however, gradually considered as a more lucrative and future-oriented alternative for farmers. The question remains, can the cashew sector be governed in the same way as the cotton sector, ie. with a strong government lead?

In Abidjan, the emphasis is clearly on a strong role for the government in the sector. After malfunctioning at both the institutional and operational levels, the government began reforming the cashew sector in 2012. This led to the creation of the Cashew and Cotton Council in 2013, a regulatory body under the Ministry of Agriculture and Rural Development. The authority announces a fixed minimum price for farmers and exporters every cashew season, oversees licensing of traders and exporters and re-invests two third of the export levy on RCN into the sector. The CCA has served as an example in the creation of the Burkina Faso Cashew Council (CBA) in March 2019. As an entity of the state with an economic character (Epec), the CBA « aims to promote the cashew nut sector through the implementation of actions of organization, coordination and development of the activities of this sector throughout the national territory« [7]. But the setting-up of the CBA is not without creating waves in the cashew sector and the question arises as to how this public structure will succeed in integrating the highly organized private actors in the country.

Compared to other cashew producing countries and especially its big neighbor Côte d’Ivoire, the cashew sector in Burkina Faso is characterized by a strong level of organization of its private actors.  The production segment is represented by the Union Nationale des Producteurs de l’Anacarde du Burkina (UNPA), the processing segment by the Association Nationale des Transformateurs de l’Anacarde du Burkina (ANTA-BF) and the trade and commercialization segment by the Union Nationale des Commerçants et Exportateurs de l’Anacarde (UNCEA). These three associations organized themselves into an interprofessional body called the « Comité Interprofessionnel de l’Anacarde du Burkina » (CIA-B). The idea of creating and organizing the interprofessional body in Burkina Faso was born from the will of the private actors themselves to better represent and preserve their interests. Its main objective is to “enhance consultation between the various stakeholders in the value chain in order to facilitate the harmonization of their positions and improve communication and exchanges between them”[8].

The interprofessional body has a strong voice and has representated the private sector for more than five years. It is at the request of the latter and as a result of a dialogue between long-standing private actors that the wish for a public structure such as the CBA was suggested to the government. But the private interest groups in the interprofession do not yet find themselves sufficiently represented in the new public body. Most recently, the redistribution and reinvestment of the export tax on raw nuts pose a challenge. Introduced in 2018, 80% of the export tax on RCN is expected to be re-invested through the interprofessional body, this export levy, set at 35 CFAF/kg, in 2018 generated a sum of more than 3.4 billion FCFA. The question of the governance of the sector now arises and it is clear that the answer lies in the dialogue between the inter-professional body and the new public structure CBA.

For the past ten years, German Development Cooperation through the GIZ “Competitive Cashew Initiative” (ComCashew) project, has been working in the cashew sector in Burkina Faso. ComCashew is a private-public partnership project with funding for a third phase from BMZ. In collaboration with private companies and public sector partners, critical progress has been achieved for over 512,000 farmers and about 40 processing companies in six African countries.

In Burkina Faso the project actively supports the public-private dialogue, especially with regards to the question of sustainable governance. But ComCashew as a development partner is far from being alone with this approach. With 21 different implementation agencies, NGOs and financial partners active in the cashew sector in Burkina Faso, the country has one of the highest numbers of different development actors in the cashew sector[9].  Among these actors besides GIZ are also the Dutch SNV, Self Help Africa, Unité Nationale de Mise en Œuvre du Cadre Intégré Renforcé (UNMO/CIR), Fairmatch Support, Rongead, and Tree Aid.

Given this diversity of partners, ComCashew took the initiative to promote dialogue between the projects. As a result, the OPP-cashew group (ONGs, Projets et Programmes) has been created, the group of development partners meets regularly in ComCashew’s office in Ouagadougou. This network ensures the important harmonization of advice and information given to public and private actors in the cashew sector and contributes to creating synergies among development partners.

In Burkina Faso, the cashew sector is young and promising. It attracts the attention of a large number of actors from public, private and international cooperation. And above all, it remains to be forged by these actors. Unlike cotton, the game is open and the dynamics of the actors, especially private ones, offer a new field to develop. It remains to be seen how the public-private dialogue with this new supervisory structure, the CBA, will be institutionalized, how the interests of the interprofessional body will be represented and, above all, whether this Burkinabe model will be able to prove its worth.

Next Meeting of the Forum sur le Cajou Sahélien