In March the New African magazine ran a story on the new blockbuster movie Black Panther and how it might change engrained first world perceptions of Africa and Africans. In Is the high grossing record-breaking Black Panther movie shattering western stereotypes about Africa? the author reGina Jane Jere highlighted that « the movie is such a marvel to many Africans and Black Americans beaming with pride ».

Indeed, to many Africans and black Americans, Black Panther has become more than just Hollywood hit film. « It’s a game-changer, or at least it should be – and for many reasons », as the author put it, going on with an elaboration of these reasons, stated by illustrious people of the film business and cultural arena. 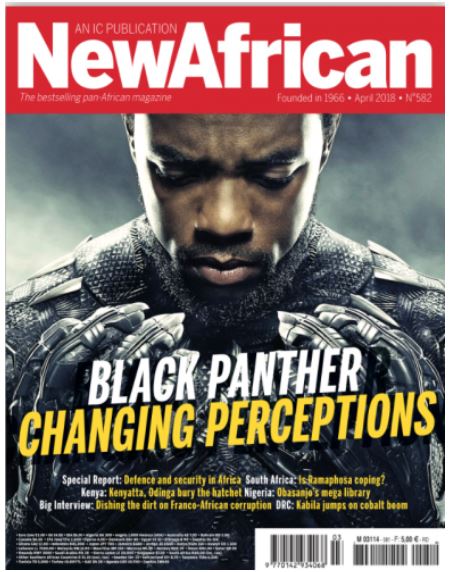 Cover of the New African magazine, April 2018 edition
(Only available to subscribers at present)

One month later the subject has not faded out a bit, the New African runs a cover story. This time the changing perceptions caused by the movie are the angle.

Though for the main part perceptions discussed in the article are those of people of African descent living in other parts of the world, not in Africa, Thomas Breuer of the Support to Land Reform Project in Namibia recommends reading the article on changing perceptions to fellow SNRD members (only available to subscribers right now). He senses that the article triggered a great vibe and lively discussions in Africa.

« What I find so fascinating about this article is that apparently the African youth lacks role models, « heroes“ and « heroines », mainly in connection to their own path in life and in terms of a positive feeling of self-worth », says Thomas.

Positive self-esteem and attitude a prerequisite to any success

Actually, it was exactly this confidence in their own strength, tenacity and endurance that made any achievement possible in the first place. Positive mentality and attitude were indispensable for youngsters to get into any form of employment — which is one of the declared main goals of development cooperation currently.

This was especially true when young people decide against being employed but rather chose to work for themselves, i.e. being self-employed.

Thomas mentions that there had been a great case presented at the recent meeting of the PPARD working group, where a young entrepreneur from Kenya spoke about her experiences. Her stories included a couple of heavy setbacks at the beginning. She did prevail however, showing to others that entrepreneurship and entrepreneurial spirit meant never to give up easily, having a strong belief in one’s own successful path.

Thomas emphasizes the importance of these role models, success stories as young black entrepreneurs. Her success meant that she creates real employment for herself and others and is one way to expand. She should be the role model of the young African generation. In Nairobi, the meeting participants learned from the awesome presentations that employment opportunities provided by Kenyan government are actually very limited. It is private business which had to fuel the job engine, especially local and national companies and here especially the agri-food sector (Africa is still importing food for 40 billion U$ every year and an OECD Study shows the booming food (urban) economy in Africa), as it was the case with the young Kenyan entrepreneur who had spoken about her startup. In the discussion it became clear that the right opportunity-driven mindset, entrepreneurial spirit, building-up networks capacities and the attitude for innovation and growth were much more of importance than the technical skills.

“If I remember correctly, 9 of 10 jobs will be created in the economy and not in the public sector and that can only happen if we find a way to stimulate innovation, entrepreneurship and start-ups of the young generation in Africa.”, Thomas concluded.