Are there lions wandering around Cameroon’s Central Region?

After rumours about a lion pack in a mosaic forest zone,
conservationists went out to look for the stray cats

Yaoundé, December 2018.  Rumours emerged that near Mpem and Djim National Park (MDNP) cattle had been attacked in some close by villages. Herders claimed their livestock had been killed by lions. For various reasons, these accounts seemed unlikely — the last reported sighting of lions in this area was more than 40 years ago and the nearest known lion population lives 300 kms up north. Many people reside in the area between the northern habitats in and around the Bénoué Complex and MDNP. Besides, it is highly untypical of lions to venture into a dense forest ecosystem where spotting and hunting prey over a long distance is hardly possible for them. Why would lions leave their natural habitat, wander around a region wrought by human activity and abide in a place where they cannot hunt, or might even endanger themselves?

A wild goose chase — for lions?

During a series of scouting missions, GIZ’s Iris Kirsten heard more strange stories. She began investigating, questioning villagers and searching for hard evidence. “We asked if anyone had photos, videos or seen fresh tracks to substantiate the rumours”, Kirsten explained. For several months, she did not find any proof until a group of rangers took pictures of a few suspicious footprints.

“We immediately sent these photos to Dr Bauer of Oxford University and Dr Tumenta of the University of Dschang”, Jean Pierre Bissek (MDNP warden) remembers. Though fuzzy and without scale, these photos were evidence enough to pull an international investigation team together. With support from the Cameroonian Ministry of Forest and Wildlife (MINFOF), the UK-based Born Free Foundation and GIZ sent their experts to the park.

A week after the pictures were taken, the group began to look for more tracks, set up camera traps, investigated prey kills and did ‘call-ups’ to attract lions with high-pitched sounds. “We heard about more attacks on cattle by large carnivores as close as 50 kms South-East of MDNP”, team member Andre Mveimané recalls. 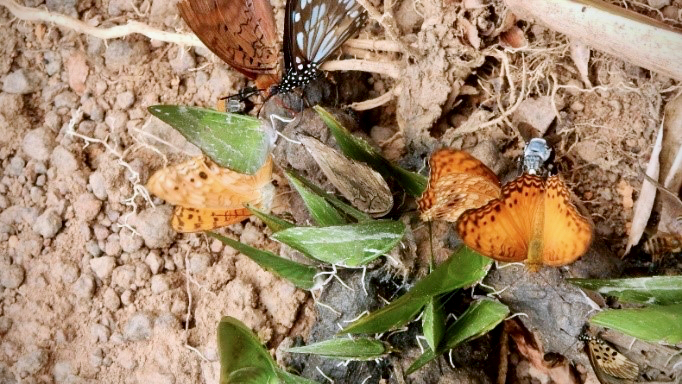 A patchwork of forest and savanna

A mosaic of savanna, forest, swamp, gallery forests and rivers, Mpem and Djim National Park (MDNP) is at the heart of the transition zone between savanna and rainforest. While it is only 200 kms from Yaoundé, it’s a small biodiversity hotspot that is naturally inaccessible and rarely visited. Little research has been done, but opportunistic sightings include full assemblages of both savanna and forest species found in the region. The park is not hard-edged at all, the wider landscape extends over a 100 km around it and is highly varied, including various production and communal forests and forest exploitation sites that serve as buffer zones. There has never been a formal inventory, but MDNP has a cornucopia of species including chimpanzees (Pan troglodytes), giant pangolins (Smutsia gigantea) and African golden cats (Profelis aurata) as flagship species.

In this patchwork of forest and savanna, people practice forestry, agriculture and animal husbandry. In recent years, the area experienced rapid agricultural conversion as many farmers encroached on previously uninhabited landscapes. The expansion of agricultural activities leads to frequent and severe land use conflict between farmers and herders. Some claim that the area was uninhabited until 2006 when herders arrived with their livestock; about two years later farmers began to settle.

Despite these adverse conditions, it appeared the lions left Bénoué, a landscape of 30.000 km2 with three national parks (Faro, Bénoué and Bouba-Ndjidda) and 32 hunting zones.

Situated in the North of Cameroon, Bénoué Complex is one of the three remaining large carnivore strongholds in West and Central Africa hosting an estimate of 250 adult individuals (Bauer et al., 2015). However, the population is under pressure as poaching, extensive pastoralism and deforestation are on the rise.

The team soon found more tracks and cattle carcasses with lion bite marks. Yet, no-one had seen the actual predators. “They were obviously very shy and avoided people”, Kirsten laughs, “— until we stumbled across them!”

As the 10-day identification mission was coming to an end, the conservationists spotted two young-adult male lions. GIZ and Born Free swiftly planned a follow-up mission with a clear objective: The minister of forestry and wildlife to order translocation of the lions to an enclosure inside the MDNP.

“The ministry wanted to establish a new lion population in the Central Region of Cameroon”, Didier Bastin, senior advisor at GIZ, explains. With the support of a South African veterinarian, the team planned to stun the lions with a tranquilliser gun.

Fresh footprints led the team to a forest exploitation site (UFA 08-1004) close to MDNP. Outside a neighbouring village, the team set up their camp and began to search the area for several days. During a routine night patrol, the group eventually encountered the two rogue males. As they are very susceptible to human interference, the veterinarian had to dart in the dark.

“But we only hit a bone and the lions escaped”, Kirsten remembers. The experts made several other attempts to find and translocate the lions – without success.

One question remains: How do they survive in such unfavourable conditions? The conservation experts developed two hypotheses, one suggesting that they scavange upon wild animals caught in snares put up by poachers.

“They might also hunt buffalo and some antelope species”, Mveimané supposes. All translocation efforts have been postponed to the next dry season. “As long as these two individuals roam outside of the park, we need to minimise human-carnivore conflict. In Kenya or Namibia, we have great schemes to compensate livestock losses for local communities”, Kirsten concludes. She and her team now want to utilise the high-level attention to advocate for peaceful human-wildlife coexistence.

The copy has been provided by Iris Kirsten, Andre Mveimané, Didier Bastin and Sven Schuppener.